HistoERIE of Erie Trivia Quiz: Xtine’s 20 Questions about the illustrious past of Erie, PA

Posted on June 7, 2017 by xtinethewriter

A long-forgotten 15-question quiz about Erie history that had been prepared on a typewriter was discovered recently. After adding five freshly baked questions, here is the final savory product. You might be able to find a few answers with search engines, but certainly not all because most of these questions originated before the internet became part of everyday technology. They painstakingly and meticulously arose from within the dusty pages of very old history books, which are listed at the end of the quiz. Answers are listed below the questions, and there’s a guide at the bottom so you can keep score and see how you ranked. Enjoy!

1. How did Misery Bay get its name?

a. By locals mispronouncing “Missouri”

b. In honor of “Misery,” the best-selling novel by Stephen King.

c. Because of winter hardships faced by Perry’s navy after the Battle of Lake Erie

d. From sailors passing through who feared the Lake Erie monster

2. In what year was Erie incorporated as a borough?

d. It never was

3. What popular local landmark was dedicated with a formal ceremony in 1926?

4. The Erie Indians, or Cats, were annihilated in a bloody war with another tribe, a conflict which culminated in 1654. What tribe is primarily responsible for the Eries’ demise?

5. As of 1885, Weigeltown was a convenient and popular stopping place for farmers and travelers. This village was located:

a. Ten miles due north of the Public Dock

b. Where the Millcreek Mall now stands

c. Near the junction of Brown Avenue and West 26th Street

6. Which famous movie star performed as a vaudevillian at Erie’s Warner Theater in 1931, then returned in 1933 and allegedly got married in Erie?

a. The neck of the peninsula

b. The crest of the hill at 26th and Cherry Sts.

c. A store in downtown Erie called the Large Lion

d. Restrooms at the Skyway Drive-In

8. Erie’s beloved Boston Store on State Street between 7th and 8th was also known as…?

b. The Eight-Story Store 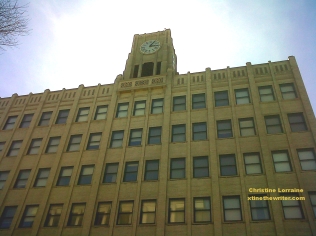 9. The Erie County Almshouse, or Poorhouse, operated from 1870 to 1918 and there was a cemetery for Erie’s pauper and indigent population on its 105-acre site. Where was it located?

10. The Algeria Farm, located in the area of W. 6th St. and Peninsula Drive, was famous as:

a. A breeding place for trotting horses

b. The region’s foremost inn and hospitality spot for immigrants

c. A nursery for citrus and palm trees

d. Provider of fishing bait such as worms, night crawlers and minnows

11. When Erie was originally plotted out over two centuries ago, it was measured with something called:

12. When war with England was declared in 1812, Erie was a struggling village with a population of about:

13. Until around 1840, the area from 12th to 18th streets in the city was a notorious problem zone, and was considered a valueless area by early settlers. Why?

a. It was overrun with highwaymen

b. It was a formidable swamp that was impenetrable

d. It was laden with tomato plants, which were thought to be poisonous

14. General “Mad” Anthony Wayne died in Erie before help could reach him in 1796. He was on a ship traveling to be wed to Mary Vining, the love of his life, when it was forced to land here due to Wayne’s condition. He passed away from:

15. During nice weather months thousands of people crammed onto the Public Dock in the 1880s because:

a. They were celebrating We Love Erie Days

b. They were “bugging” State Street in buggies

c. They enjoyed feeding the ducks

d. They wanted a steamboat ride to Massassauga Point

16. The first known official sailing vessel launched on Lake Erie was built by Robert Cavalier. This vessel was named:

17. The City of Erie’s original land content totaled about:

18. Before supermarkets existed, obtaining salt was challenging. In the early 1800s, salt played a major role in Erie’s development as a port and transportation hub. It was shipped from Buffalo to Erie, then carried by ox teams:

a. To where the Millcreek Mall now stands

b. Throughout the Mississippi region to Western U. S. territories

d. Back to Buffalo by land

19. Waldameer Park was officially named and opened as a park in 1896. That site had previously been known to local residents as:

20. What is the oldest building in the City of Erie?

b. Dickson Tavern structure at the corner of E. 2nd and French

c. Warner Theatre between 7th and 8th on State Street

1. C. Because of winter hardships faced by Perry’s navy after the Battle of Lake Erie. “The ‘Little Bay’ near the tip of the peninsula where the ships sheltered, next to the current Perry’s Monument, was later named ‘Misery Bay’ because of the hardships during the winter of 1813–1814, after the men returned there from battle. Many men suffered from smallpox and were kept in quarantine near the bay. A great many infected men died and were buried in what is now called Graveyard Pond,” according to https://placeandsee.com/wiki/presque-isle-state-park as well as local folklore.

3. B. Perry Monument. In 1926 when this Presque Isle landmark was dedicated, there were no roads across the peninsula, thus dignitaries and guests all traveled there by boat.

4.D. Iroquois. One historical account describes a horrible bloodbath between native American tribes in the area of what is now E. 28th and Holland Streets. (Hakawi was a fictional tribe from the old sitcom “F-Troop,” as in “where the heck are we?”)

5. C. Weigeltown. This small village was situated on the southwest edge of the City of Erie at the junction of “Brown’s Avenue and The Ridge Road.” It was named after George Weigel Sr., who purchased 50 acres of land at that site in 1833.

7. A. The neck of the peninsula. This area was, “…Erie’s party capital,” and “…Hotels, dance halls, bars and a small fishing village were located there. Massassauga Point, served by several ferryboats that visited both the Head and one or two areas on Presque Isle, prospered from 1872 until the main hotel burned to the ground in 1882,” according to http://www.presqueisle.org/blogs/presqueisle/2012/10/presque-isle-state-park-making-it-your-place-for-all-seasons-part-2/ 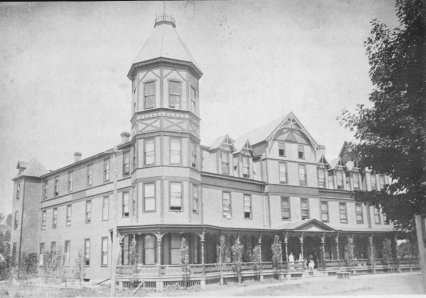 The massive Massassauga Hotel was located close to where Sara’s is today.

8. C. Erie Dry Goods. As a side note, the store Candyworld/Book City was the downtown Boston Store’s next-door neighbor in the 1970s, and it eventually opened a second outlet in the Liberty Plaza. The tantalizing aroma of mountains of candies is almost enough to make one wish to rent a time machine.

9. C. West 23rd St. and Pittsburgh Avenue. The majority of those buried there have since been exhumed and moved to a site in Fairview Township just north of where the original almshouse was located off of Blair Road. However, “The remaining 247 remain at the original (W. 23rd St.) site to this day, are buried under roads, houses, and utility lines,” according to wikipedia under the topic “Erie County Almshouse.” The second almshouse structure in Fairview has since been repurposed as Pleasant Ridge Manor West, located off of Route 20.

10. A. Breeding place for trotting horses. Algeria Farm was among a group of farms owned by William M. Scott. World famous race horse, Rayon d’Or, was imported from Europe by the farm at a cost of $40,000 in 1882.

11. D. The Erie Stone. Shortly after it was founded as a port town, Erie was  “… plotted and laid out by Andrew Ellicott with measurements of an upended slaty shale stone called The Erie Stone. The stone was labeled with the latitude of 42 degrees, 8 feet, 14 inches and enabled the planner to keep the town streets and alleys uniform,” according to https://www.worldmapsonline.com/historicalmaps/1W-PA-ER-1909.htm

12. B. 400. When President Madison authorized Erie’s Daniel Dobbins to build a fleet of ships during the War of 1812, Erie was a village of about 400 brave settlers. The ships built by Dobbins were for the purpose of defending the Great Lakes against British naval attacks.

13. B. It was a formidable swamp that was impenetrable. Local residents became alarmed by sickness outbreaks near this area, which they blamed on the thick swamp. In around 1840 they joined together and formed a “bee” to dig ditches that enabled the region to drain and make the land useful.

14. C. Gout. Wayne died in Erie two weeks prior to his 52nd birthday. The gout that killed him had plagued him for many years, and originated from a leg wound he had suffered after being shot by an American sentry who didn’t recognize Wayne in the darkness.

15. D. They wanted a steamboat ride to Massassauga Point. Numerous fights and violent disruptions were said to have occurred as people waited impatiently on hot summer days to be ferried across the bay.

16. A. The Griffon. In 1679 Robert Cavalier founded a French colony in the vicinity of the Lake Erie outlet, where it empties into the Niagara River. He built and launched the Griffon shortly thereafter.

17. D. 1 square mile. Erie was originally laid out with boundaries that ran from the bay south to Twelfth Street, and from Chestnut to Parade Street, which equals approximately one square mile. Two other land plots were also laid out to the west, and each was about a square mile.

18. C. To Waterford. From there, salt supplies were transported via French Creek and the Allegheny River on flatboats to Pittsburgh, a growing town that was lacking in sources of salt.

19. B. Hoffman’s Grove. A taste of trivia – Waldameer’s old dance hall burned down in 1937, and a replacement was built in the 1940s. A contest to name the new hall was conducted and the name Rainbow Gardens won.

20. B. Dickson Tavern at the corner of E. 2nd and French Streets. This local landmark was built by John Dickson shortly after the War of 1812. Also known as Perry Memorial House, this site is listed in the National Register of Historic Places. Since the day the photo below was taken through an exterior basement window in 2003, the building has been renovated and this historical mannequin display view no longer exists.

15-20 correct: AbsolutERIE in HistoERIE – Congratulations! You are a true local historical oracle. Your extensive repertoire of knowledge is inspiring to those around you, and you always select the perfect place when it comes to where to go. Chances are you easily become absorbed in the enchanting waterfront scenery, trying to visualize Perry’s fleet sailing across the lake, and revel in the ornate architectural delights of Millionaire’s Row. Your enthusiasm for local history is contagious, and you never hesitate to spread it around wherever and whenever possible.

9-14:  WealthERIE of HistoERIE – You are a treasure trove of local tidbits. When it comes to knowing the difference between the Koehler collar and Mad Anthony Ale your Dobbins Landing ducks are all in a row.  Places like the land lighthouse, Wayne blockhouse and Frontier Park are your turf, and you are armed with an arsenal of precious points of local trivia.

3-8:  CamaradERIE with HistoERIE – You and some historical details are old friends. You are intrigued enough with the local past to be aware of how it has affected you and places you know and love. You appreciate paintings and photographs of old Erie, and marvel at the endurance of early settlers in this region. You know there are many interesting sights and sites around Erie, and you enjoy these assets whenever you can.

0-2:  HistoERIE RevERIE – You might know a little bit about Erie’s illustrious past, and the good news is there’s plenty of time to widen your local historical horizon. It’s possible that you either daydreamed or slept through local history class. Oh wait, that’s not taught. Don’t feel like you are alone in this lack of localness. One must consider that local history is not officially incorporated into the curricula of most formal educational systems. So spread the good old news and have fun exploring.

Aside from websites listed above, the following books were utilized as sources in the compilation and creation of this quiz:

Check out Xtine’s original music with a quick click below